Additionally, paste this code immediately after the opening tag:

The item has been added

I was born in Petah Tikva in 1954 to my parents Tikva and the late Zvi Rosenblum, where I spent my childhood and studies in elementary and high school. I started my career as a model, as an actress and in addition, following my great love for writing, I worked as a journalist in "Modern Times" - Maariv, in "One Head" - Yedioth Ahronoth, "Monitin" and "Laisha". In addition, I have published two autobiographical books: "Sweet Moments" (1983) and "The Road to the Dream" (2000). Later I served as the public relations manager of the insurance company - "The Israeli Phoenix".

In 1989 I founded the cosmetics company I own - "Pnina Rosenblum Ltd." which over the years has become a leading company in the field and has expanded to other areas in which I am very proud: health food, gluten-free food, keratin series after skating - no salts, men's care products, atmospheric perfumes And bedding.

In 1994, I received the NAMAT Award for Women Making History in Business from the late Prime Minister Yitzhak Rabin.

In the years 2004 - 1995, my company was awarded the selected product for the high quality of the products and the satisfaction of the customers.

In 1998, I was elected the most successful woman in Israel in a survey conducted by a weekly in Laisha. This year I also served as chairman of the Ilan Center and the Center for the Blind.

The desire to change, improve and act for society, motivated me to integrate into Israeli politics. I founded the "Pnina Rosenblum" party under my leadership and in the 1999 elections to the 15th Knesset, 45,000 voters voted for me, and I was missing only 3,000 votes to pass the blocking percentage and be elected to the Knesset.

In the elections to the 16th Knesset, I joined the Likud movement and came in 39th place on the list.

On December 14, 2005, I was sworn in to the 16th Knesset as a Likud MK, thus fulfilling another of my many dreams.

Over the years, I was crowned a successful and groundbreaking businesswoman by: NAMAT Award for Women Who Made History in Business (1994); "Selected Product Award" by Yedioth Ahronoth for the high quality of the company's products and customer satisfaction (2004 - 1995) In a row, and "The Marketing Woman" on behalf of the Advertisers' Association (1998). In addition to these awards, she was chosen by the Israeli public as one of the ten most revered figures in the country (Maariv newspaper 1998) and as the most successful woman in Israel (Laisha weekly, 1998).

Excited to say that in 2020 the cosmetics company I own, Pnina Rosenblum Ltd., has 30 years of experience.

In 2019 I set up a new company called "Pnina Rosenblum CBD Products Ltd." that will market HEMP and CBD based cosmetics.

And the hand is still tilted. 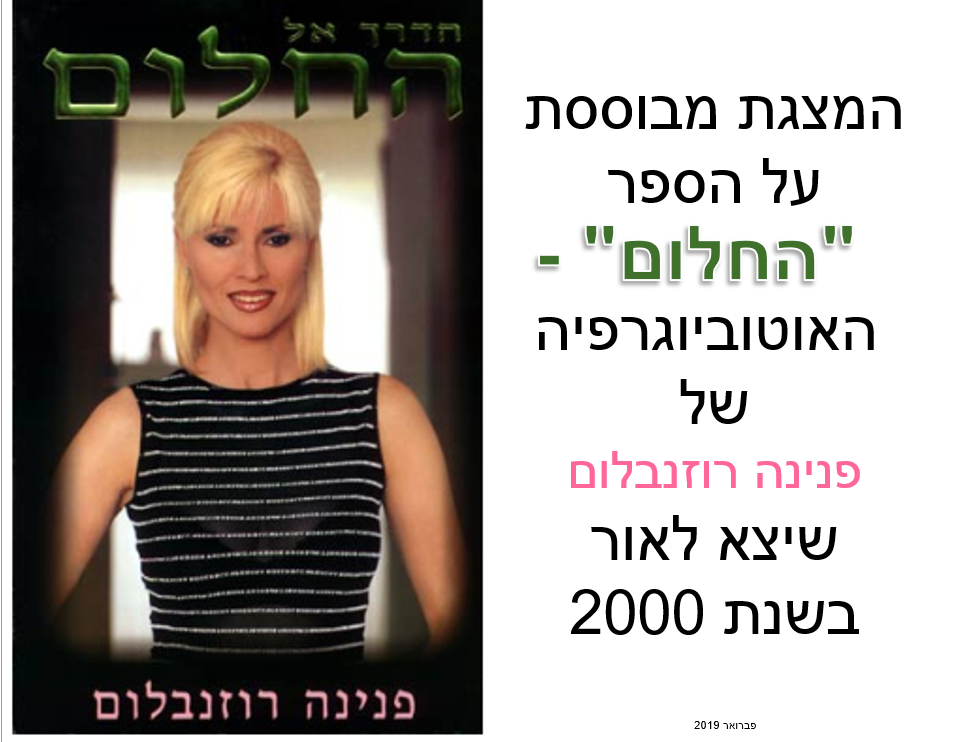